The acquisition and donation from the San Jacinto Battleground Association (SJBA) is the latest in a series of restoration and enhancement projects aimed at conserving the historic landscape where the Battle of San Jacinto was fought on April 21, 1836.

“The addition of this critical tract of land, and its rich cultural and natural legacy, represents a great gift to Texans and the future of the San Jacinto Battleground,” says Carter Smith, Executive Director of TPWD. “We are grateful for the work of SJBA in protecting the site and for ensuring that current and future generations of Texans can continue to connect with the outdoors and the history of our home ground.” 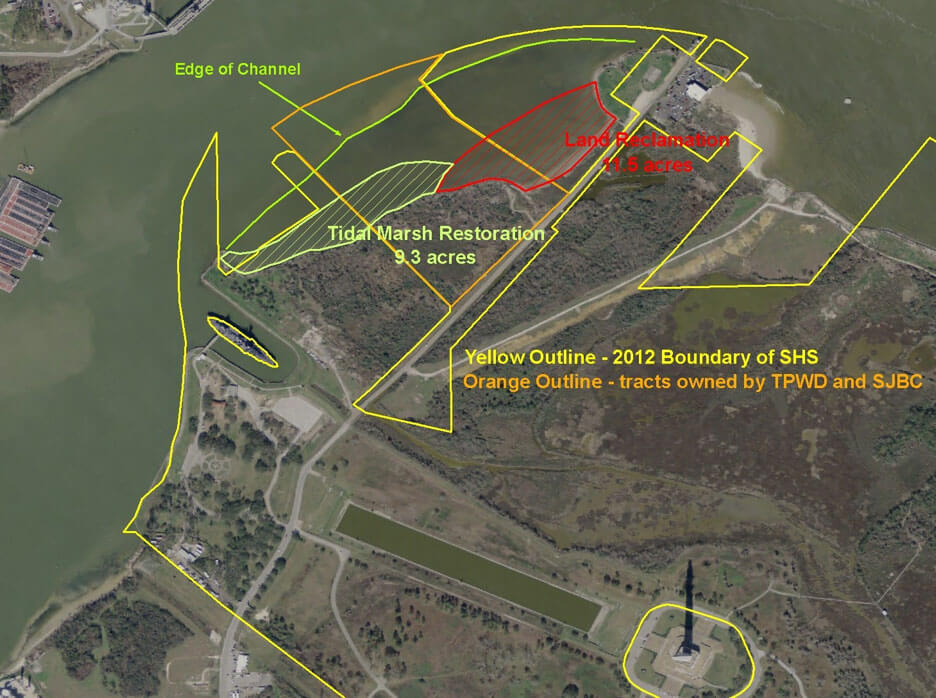 The SJBA acquired these tracts in 2010 and 2014 through the dedicated efforts of the late Jan DeVault, the SJBC’s co-founder and former president.

“Our acquisition and maintenance of the tracts have made possible TPWD’s plans to restore the area to its 1836 appearance,” says Cecil Jones, President of SJBA. “These new features will allow visitors to better experience and understand the battle, and the rare natural wildlife habitat on the Houston Ship Channel.”

The transaction includes an in-kind donation from the SJBA valued at more than $3.1 million, as well as a conservation easement with the Galveston Bay Foundation, ensuring the preservation of the site as part of the battleground landscape. The SJBC acquired a portion of these properties from the estate of late Houston attorney John M. O’Quinn.

TPWD has been working towards acquiring all remaining land on the San Jacinto Peninsula for more than 15 years. The land consists of almost 1,000 feet of waterfront on Buffalo Bayou on the Houston Ship Channel and represents the largest remaining acquisition in this effort.

“This critical acquisition provides a one-of-a-kind experience for park visitors to retrace the footsteps of Texas history as they traverse this new property, that now provides a contiguous connection to a local county park,” says Rodney Franklin, Director of Texas State Parks. “We are excited to preserve this significant piece of Texas and look forward to developing more outdoor recreation opportunities and conservation projects in the future.”

The shallow water and dense woodland, as well as a sand beach and tidal marsh, offer premium habitat for a variety of song birds that use the forested areas of coastal Texas as a stopover resting and foraging habitat during fall and spring migrations. Other wildlife found in the area include the American alligator, beavers and river otters.

The new acres currently overlap with land targeted for a restoration project aimed at reclaiming about 20 acres of battleground lost to erosion. The new acquisition and the restored property will connect the current San Jacinto Battleground State Historic Site to Juan Seguin Park, a Harris County park at the northern tip of the peninsula.

The SJBA’s important contribution of conserving the tracts of land is indispensable. Since its inception in 2002, the SJBA has offered volunteers, scholars, foundations and other non-profits the opportunity to promote scholarship, archeology, land preservation and public education regarding the battle of San Jacinto.

“A significant part of the SJBA’s mission is to safeguard and reclaim the San Jacinto Battleground for future generations,” says Jeff Dunn, SJBA co-founder and current Vice-President. “In addition to land conservation, the SJBA has supported native prairie seed plantings, boardwalk improvements, and archeology, including a breakthrough archeology investigation in 2009 that discovered the Mexican surrender site.”

The newly acquired land is steeped in early Texas history. The property was awarded to Arthur McCormick in 1824. McCormick, a native of Ireland, was one of Stephen F. Austin’s Old Three Hundred colonists. By 1836, a road connecting Harrisburg with Nathaniel Lynch’s ferry, now known as the Lynchburg ferry, crosses these tracts. The road became a critical escape route during the Runaway Scrape when Texans were fleeing their homes during Antonio López de Santa Anna’s conquest of Texas.

The land was also part of the historic town of San Jacinto, established along Buffalo Bayou shortly after the 1836 battle. The town housed lumber yards, blacksmiths, docks and other businesses catering to the growing steamboat traffic between Galveston and Houston. It was also the site of a Confederate recruiting center and ordinance depot during the Civil War.