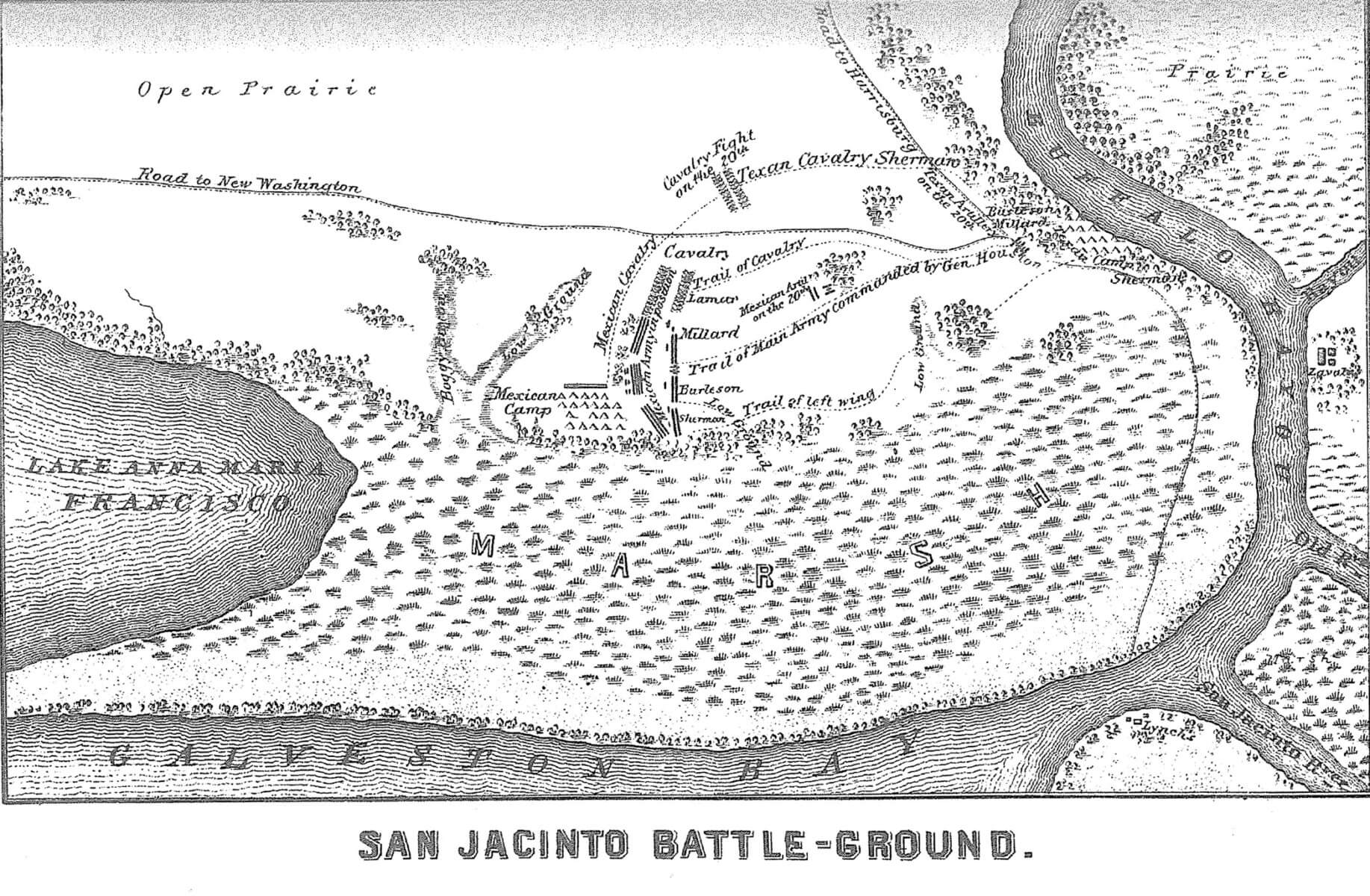 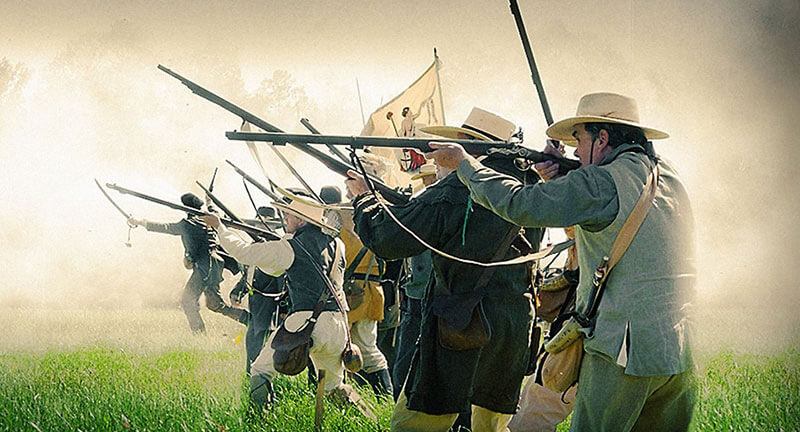 San Jacinto Battleground is the site where the army of a newly-declared independent Republic of Texas under Sam Houston attacked and defeated a division of the Mexican Army under General Antonio Lopez de Santa Anna on April 21, 1836. The battlefield, today, is located approximately 22 miles east of downtown Houston, Texas at the confluence of Buffalo Bayou and the San Jacinto River.

Weeks prior to the battle, the field was on the route of the Runaway Scrape, an episode in the Texas Revolution involving the evacuation of Texan civilians fleeing east toward the Sabine River and the safety of the United State following the battles at the Alamo and Goliad. The Texas Army marched down Buffalo Bayou and arrived at Lynchburg Ferry on the morning of April 20 and backtracked to a spot on Buffalo Bayou where the Battleship Texas is now berthed. The Mexican Army arrived from New Washington (now Morgan’s Point, about 8 miles southeast of the battlefield) later that morning and throughout the day both sides fired at each other, ending the day with an inconclusive cavalry skirmish.

The Texas Army, approaching 900 men, included infantry, cavalry, and two small cannons, a gift from citizens of Cincinnati, Ohio, known as the “Twin Sisters.” One of the units in the Texas Army consisted of Hispanics, native Texans, from San Antonio, under the command of Juan Seguin. They wore white badges on their hats to distinguish them from Santa Anna’s men. Seguin was assigned to the Second Regiment, commanded by Sidney Sherman.

On April 20, Santa Anna’s division numbered approximately 700 men, including infantry, cavalry, and one large cannon, “El Vulcan.” Martin Perfecto de Cos reinforced Santa Anna with 500 infantry on the morning of April 21, giving Santa Anna numerical superiority. The Mexicans were encamped about a mile from the Texan camp, south of the present San Jacinto Monument, and surrounded on two sides by marshes, a boggy bayou, and Peggy’s Lake.

On the morning of April 21, Santa Anna received reinforcements from General Cos, raising the size of his division to about 1,200 men. Satisfied that the Texans would not attack his camp, Santa Anna allowed his men to rest in preparation for an assault on the Texan camp on the morning of April 22. Meanwhile, Houston dispatched a small squad under Deaf Smith to destroy Vince’s bridge over Vince’s Bayou (about 8 miles west) to prevent further Mexican reinforcements and cut off any retreat by the Mexican army. During the day the Texans debated about whether to attack the Mexicans or defend their camp. The decision was made to attack.

The Texans marched across the open prairie with trailed rifles and the “Twin Sisters” at about 3 in the afternoon. The Mexicans saw the advance and began firing their cannon. When the Texans arrived within 70 yards they stopped, opened fire, and charged the Mexican camp, yelling the famous Texan battle cry, “Remember the Alamo! “Remember Goliad!” The Mexicans valiantly resisted for about 20 minutes before their ranks broke in chaos. For the next several hours, hundreds of Mexican soldiers were killed as they tried to flee into the marshes while some attempted to escape on horseback. Many of the surviving participants on both sides described this part of the engagement as a slaughter, but the carnage was the result of several weeks of outrage following Santa Anna’s annihilation of Texan forces at the Alamo and Goliad.

Santa Anna attempted to escape, but was captured the day after the battle about 8 miles west of the battlefield. He was brought to Houston’s tent on Buffalo Bayou (near the present Battleship Texas) as a prisoner of war. During the next few days Santa Anna began negotiations for a “treaty” that promised to recognize Texas independence. The battle of San Jacinto, though brief, was recognized as one of the decisive battles of the 19th century. The battle ended the military phase of the Texas Revolution and led to the establishment of the independent Republic of Texas.

See our resources page for links to historical materials on the battle. 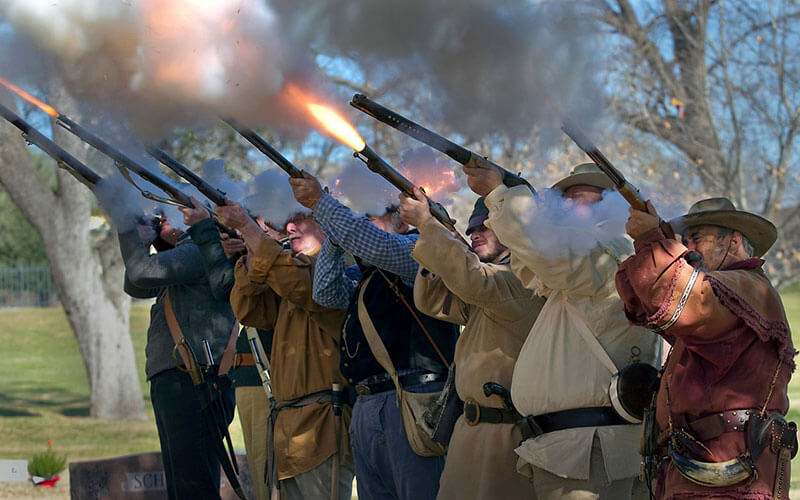 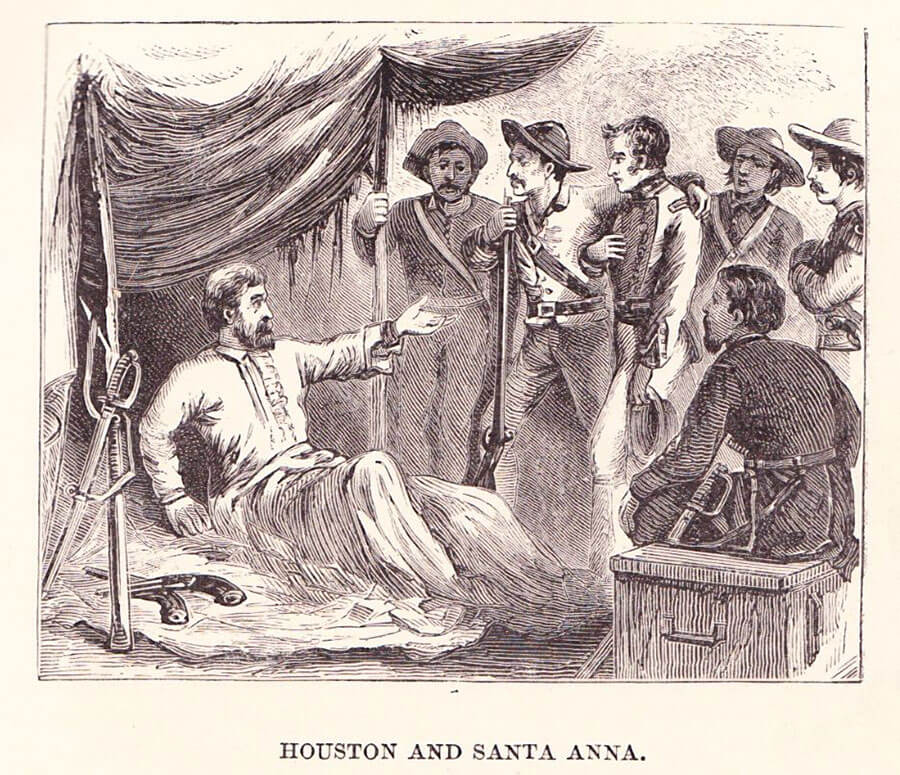 After a day of artillery fire and cavalry skirmishing, both armies retired for the night of April 20, separated by one mile of prairie and a gentle rise of ground. The Texans encamped along Buffalo Bayou and the Mexicans erected a breastwork of timber and pack saddles at their campsite.
Donate Today